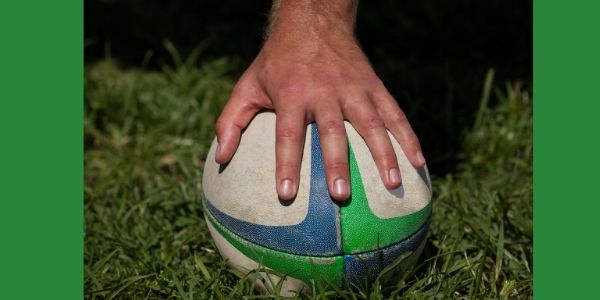 A key difference between touch and other forms of rugby is that the ball usually cannot be kicked or played with a foot. The exceptions include the “tap” and “roll ball”.

These terms may be new to you, but read on for clear explanations and some short video clips. You’ll also learn about rucking in touch rugby and the role of the dummy half.

What Is A Tap In Touch Rugby?

A tap is used to start each half of a touch rugby match and when a penalty is awarded. To take a tap correctly:

Any player can take the tap. That player or any onside team-mate can pick up the ball. The place where the tap is taken is known as the mark. The opposition must stay 10 yards back from the mark until the ball is tapped.

What Is A Roll Ball In Touch Rugby?

In touch rugby, play is restarted with a Roll Ball when a player is touched by or touches an opposition player.

Touch rugby players restart play with a Roll Ball by

When Is A Roll Ball Required In Touch Rugby?

A Roll Ball is required in touch rugby when there is a change in possession. This may be due to a penalty infringement such as a forward pass.

A change in possession also occurs when the player with the ball is touched by the opposition or initiates a touch.

If the player drops the ball or goes over the sideline, then the opposition restart with a Roll Ball.

There are two main techniques to performing a roll ball. One is where you plant the ball between your legs and step over it. This ensures that the ball is static. This is also known as a dump.

This video clip shows a Roll Ball with the player planting the ball and stepping over.

Another technique for a Roll Ball is with the player rolling the ball backward by no more than 1 meter. You need to roll gently! If the ball goes past one meter, your team will be penalized.

A rolling ball is more difficult to pick up than a static ball. Your teammate may fumble and drop the ball when trying to pick it up while it is moving. This is known as a knock-on. If you’re playing at beginner level, your coach may ask you to stick to planting a static ball.

Play the video, which jumps to an example of rolling the ball.

The referee will award a penalty to the opposition if you perform a Roll Ball without a touch.

How To Defend An Opposition Roll Ball

When your opposition is restarting with a Roll Ball, you must retreat to the onside line. Otherwise, you will be penalized for being offside.

The referee will indicate the onside line. Depending on the match rules, this may be five meters or sometimes seven meters. If you’re joining a new team or a new tournament, you should check the local rules.

Do not advance until the ball is rolled and has been picked up. If you are running towards your own scoreline to get onside, you must try to avoid contact or getting in the way of the Roll Ball. Otherwise, you will be penalized for interfering with play. When the ball changes possession, do not try to delay the Roll Ball by holding onto the ball (or throwing it away). This will also result in a penalty against you for delaying a Roll Ball.

What Is The Dummy Half In Touch Rugby?

When a Roll Ball is performed in touch rugby, the player who collects the ball is called the dummy half. The dummy half may pass the ball off the ground, or scoop up the ball and run or pass.

So, this is not a “fixed” position attached to one player in the team. Any touch rugby player may act as a dummy half. By the way, the role is also called the acting half – for obvious reasons.

You’ll also hear the role simply called “the half”.

The dummy half cannot score. They can pick and run with the ball, but possession is turned over to the opposition if they are touched before passing to a teammate.

What Is Rucking In Touch Rugby?

A Roll Ball involves the player planting the ball and the dummy half who is about to collect the ball. The area which these two players occupy is known as the ruck.

Opposition players must retreat from the ruck. They will be penalized if they delay retreating or go to ground near the ruck. This gives great attacking opportunities to the team in possession of the ball.

You can use combinations of two, three, four, and more players to ruck down the field towards the opposition scoreline.

Is Kicking Allowed In Touch Rugby?

Kicking the ball or playing it with a foot is not allowed in touch rugby with these exceptions:

A penalty is awarded if the ball is kicked in other circumstances. Penalties in touch rugby are taken by using what’s called a “tap”. Ironically, this is one of the exceptions where the foot is used to play the ball – with a light touch.

2 thoughts on “What Is A Tap And Roll Ball In Touch Rugby? (Video Examples)”