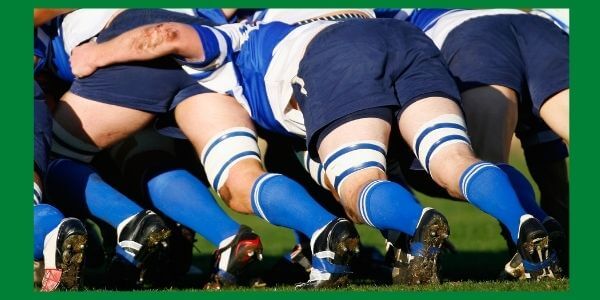 Now that referees wear microphones, television viewers may hear shouts from rugby players as they form a scrum. But it’s hard to make out exactly what’s going on.

Rugby forwards say very little in a scrum. The most likely words are:

We’ll run through these scenarios, and tell you exactly what phrases are used at scrum time.

What Do Rugby Players Say Before A Scrum?

When the referee indicates a scrum, you’ll often see the forwards gather together quickly to plan their tactics. There won’t be a whole lot of talking. The forwards are more likely to be breathing hard.

But the pack leader may have specific instructions for his forwards. These will be short and simple phrases practiced on the training pitch.

“Scrum long” or “Keep the ball in”

The pack leader may decide that their scrum has been dominant so far. In this case, he may tell the scrum-half and number eight to keep the ball in the scrum. The goal is to drive the opposing pack backward and get a penalty.

That could be worth three points if it’s in the range of the posts. But the forwards won’t care. They’ll be too busy back-slapping their front row. It’s a big deal for a pack to get one over on their opponents.

This is the opposite of “scrum long”. The call is designed to get the ball out as quickly as possible. The hooker should strike the ball backwards as soon as it’s put in by the scrum-half.

The number eight should either pick and go straight away. Alternatively, the scrum-half should pass the ball out to the backs immediately.

This is a call for two very different circumstances.  The half-backs may want to run a planned move across the backline. Sometimes an outside back spots a weakness in the opposition e.g. a center limping with a slight strain.

The other reason is when the pack leader feels that although they have the ball, the attacking team is weaker in the scrum than their opponents.

This call tells all eight forwards to stay bound and push together in a powerful drive. You may be thinking – doesn’t this always happen? No.

Our article on referee scrum calls describes the older and current instructions referees give to the players. The current referee call is “Crouch-Bind-Set”. When the referee calls “Set”, the packs engage and compete.

The goal of engagement is to push forward while keeping your angles straight. Every player in the scrum must work in unison to drive forward successfully. Many rugby teams achieve a collective rhythm by chanting a count.

The simplest call is “One, Two, Three, Four”. The numbers are chanted with the same rhythm as used in training over and over again. Players wait for the last word (four) to push forward.

There are several variants of this four-part call:

The last is probably the easiest to hear from the sidelines or through the referee’s microphone. You may hear an elongated rumbling “sqeeeeze”.

A historic All Blacks scrum call

Different scrum coaches will train their pack to employ different methods. There was a period when the All Blacks used a shortened call. When the referee indicated the packs to engage, the call was

When the players yelled “squeeze”, they pulled in their binds tightly. On “go”, they pushed forward.

What Do Rugby Players Say During A Scrum?

In older times, front row forwards ambled around the pitch at a leisurely pace – a long way away from the ball. This gave them enough breath to engage in “banter” with the opposition in the scrum. I’m talking about witty insults to put your opponents off their game – well, as witty as a prop can muster.

But the game has changed. Props and hookers are expected to keep up with the play, at least to clear out the opposition from rucks. The energy expended around the park means that they must save their breath for pushing in the scrum.

And remember, referees now wear a microphone in elite matches. Players have been cited for poor conduct when “banter” gets out of hand. By citing, I mean that a panel reviews the footage after the match and passes judgment.

Take a situation where the pack leader called for an eight-man shove. The flankers are tightly bound with their heads down. If the hooker strikes the ball too hard, it can shoot out of the scrum.

“Balls out” is the call by the scrum-half to tell the pack to disengage and protect the ball.

But wait! It’s not just the attacking team that’s interested in the ball being out of the scrum. The defending scrum half may yell the call to warn his team.

What about the pack that’s pushed backward on their own put-in? If the scrum-half thinks that the opposition forwards are about to gain control of the ball, he must alert his flankers and the outside backs. They must be ready to defend, when they were expecting to be on the attack.

“Losing” is a shout that no scrum half wants to make – but may have no choice.

I’ve already mentioned that modern rugby players don’t tend to talk to their opponents as they approach for a scrum.

Ollie Le Roux, the South African prop, was big and tough from an early age. He was the youngest player to be capped as a prop for the Springboks.

There’s an oft-repeated story that goes like this: a young Le Roux was picked for a club game. The opposition front row included Piet and Andre Bester, two gnarly older players who liked dishing out a lesson to young bucks.

As Ollie was being talked about as a talented young prospect, the wily old guard were keen to have a crack at him. And this was in the days when a few punches weren’t picked up by cameras around the ground!

The legend is that Piet Bester glared at Ollie as both packs gathered for the first scrum. “Welcome to hell”, the old dog snarled.

“Meet the devil”, was Ollie’s reply.

As good a story as it is, we have to take the version from the horse’s mouth. Ollie relates that the verbals happened before the match was played.

Another player warned Ollie that the brothers were gunning for him, and Piet Bester was waiting with the welcome to hell.

“My response was to say “Piet Best”? Meet the devil, buddy”.