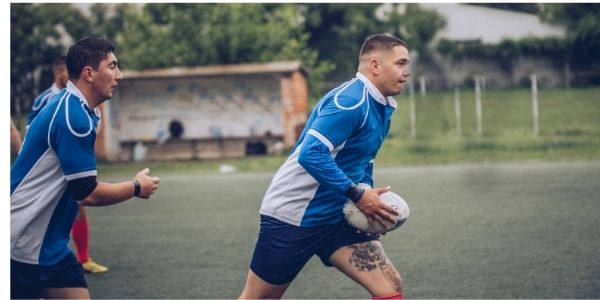 Are you about to sign up for your first taste of touch rugby? Read on for how many players you can expect to be on your team – and playing against you!

There are specific rules for the breakdown of men and women in mixed teams. And although social matches can be flexible when less players turn up than expected, there are is an accepted minimum for a meaningful game. We’ll cover all this and more…read on.

How Many Players Are In A Touch Rugby Team?

Touch rugby matches usually have six players per team with rolling substitutions. This may vary from four up to seven players, depending on the country or competition.

Mixed-team competitions are increasingly popular worldwide. There are separate rules for the breakdown of male and female players on a touch rugby team.

You’ll see a variety of touch rugby team sizes in social competitions, kids clubs, and mixed games. However, there are formal rules set by the Federation of International Touch (FIT).

The FIT website publishes the general playing rules for the sport, and these are widely followed across different countries. This includes the USA Touch Association (USAT), which is an affiliate of the Federation.

The most common rules for the number of players in a touch rugby team are:

The six players divide into these positions:

How Many Substitutions in Touch Rugby?

The Federation rules allow for unlimited substitutions, and this is widely followed.

But some tournaments are more restricted. A common practice is to allow a maximum of eight substitutions. This ensures that every player in a team of 14 gets game time.

Substitutions are usually at any time i.e. rolling substitutions. But schools and clubs may agree to a fixed time interchange for a particular match. This allows the coaches to replace most of the team at a given time.

How Many Males and Females in Mixed Touch Rugby Teams?

Mixed teams usually have six players on the field, but there are more rules for the breakdown of male and female players. Teams often play with three male and three female players, but other configurations are allowed.

Mixed touch rugby teams can have:

This means that a team could have one male player and five female players on the pitch. As mixed teams get more points when female players score, this can be advantageous.

Touch rugby originated from Rugby League clubs, and the general play is more akin to League than Rugby Union. But the concept has been embraced by many Rugby Union clubs and schools to get younger children into a no-contact version of the sport.

Some Rugby Union clubs prefer to play seven-a-side touch rugby at the younger age group. The players eventually progress to tackling, rucking, and other facets of the Union game.

Vive la difference! Five-A-Side touch rugby is played primarily in France. Apart from having five players on the pitch, there are other major differences in this form of touch rugby.

Kicking is allowed by the French, while it is completely prohibited by the more common touch rugby formats.

Aside from that, the smaller number of players allows a smaller pitch. The five-a-side touch rugby pitch tends to be half the size of the six-man version.

Social tournaments or matches are often more flexible when it comes to the size of the touch team. Players may not turn up, or there may be a big imbalance between the number of male and female players available.

A minimum of four players per team allows for an enjoyable touch rugby match where everyone gets to exercise their skills.

If teams only have eight players available, then playing four-a-side matches gives everybody a run on the field along with resting periods.

How Many Players In Beach Touch Rugby?

I envy people who can play beach touch rugby locally. It looks like great fun!

Beach touch rugby is often played with five players per side, although this may be increased to a maximum of six. Up to five rolling substitutes are allowed.

Learning The Basics Of Touch Rugby

Check out our article on the tap, the roll ball, and rucking in Touch Rugby.

1 thought on “How Many Players In A Touch Rugby Team?”