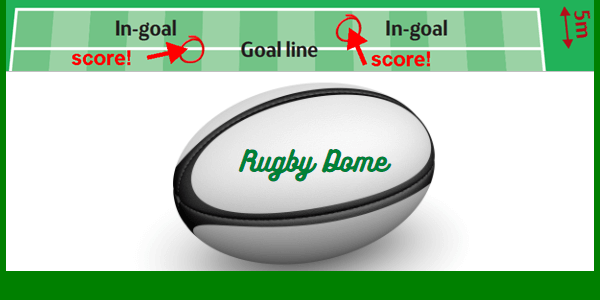 Your team wins a touch rugby match by scoring more points than the opposition. Points are awarded for a try. This article covers all aspects of scoring tries in Touch Rugby.

How Do You Score In Touch Rugby?

A try is scored in touch rugby by placing the ball on or behind the opposition try-line. One or both hands must be in contact with the ball as it touches the ground. No part of the player’s body should be outside the playing field.

This picture illustrates where the ball must be grounded for a try to be awarded.

The try is valid if any part of the ball touches the marked white line. Traditionally, chalk was used to draw lines on a rugby pitch. So the referee would look for a puff of chalk flying up from the impact.

Lines tend to be painted now, so it can be a little more difficult to assess. As always, the referee has the only say!

Grounding in the in-goal area

It’s best to eliminate any uncertainty by grounding the ball within the in-goal area. This is the area behind the opposition goal line.

But be sure not to carry the ball too far so you end up past the playing area! The try is not awarded if you ground the ball past the in-goal area.

Every part of the body in the field of play

A try will not be awarded if any part of the attacking player’s body is outside the playing field when grounding the ball. This is far less likely to happen in Touch Rugby, as you cannot be physically tackled over the sideline.

The most likely scenario is a wing getting too close to the sideline as they evade a defender. Putting a foot on or over the sideline as you race down towards the try line is the problem.

If the referee spots the error, the try will not be awarded. This is mighty embarrassing for a wing (you had one job…).

How Many Points Are Awarded For A Try In Touch Rugby?

The most common scoring system in touch rugby is to award one point for a try. Some competitions and matches may change the scoring for mixed teams. A try scored by a female player may be worth two or more points.

Mixed rugby is a fantastic social sport. But it’s not so much fun for female players if they are never passed the ball! Switching up the points system tries to ensure a good balance to team play.

It also brings extra focus on team tactics in close games. Suppose there are seconds left on the clock and your team is one point down. Making an extra pass for a female player to score is a killer move!

Coaches may switch up the scoring in practice matches to emphasize different sets of skills.

A score may only be awarded if three passes are involved. This is to reduce the temptation of constant (and boring) rucking in the opposition half. (Check out our article on roll ball and rucking in touch rugby).

These kinds of variations are agreed upon between the teams before a practice or social match. Make sure that every player knows what’s involved and who can score.

The Dummy Half Cannot Score In Touch Rugby

The dummy half position switches from player to play through a game of touch rugby. The dummy half is the player who collects the Roll Ball.

See this article on an explanation of the Roll Ball in touch rugby, and the role of the dummy half.

The dummy half cannot ground the ball for a try. It’s an infringement, and the ball is turned over to the opposition.

Every player apart from the dummy half can score a try in touch rugby.

How To Ground The Ball Properly

One or both hands must be touching the ball when it is grounded.

If the ball falls from your hand in the act of scoring, the try should not be awarded. You have knocked on the ball, and possession is turned over to the opposition.

This kind of fumbling is easy for beginners. But plenty of non-beginners do it too. Here’s one of the best Rugby Union fullbacks in the world. I’ve picked this example because he isn’t being tackled while scoring (which of course is allowed in “Fifteens” rugby). This fumble is also in an international test match!

The ball has slipped from the player’s hand while he was trying to “dot it down”. The try was initially awarded. But it was overruled on immediate video analysis.

The ball has slipped from the player’s hand while he was trying to “dot it down”. The try was initially awarded. But it was overruled on immediate video analysis.

Another way that reduces risk is to dive with both hands firmly clasping the ball. However, diving isn’t always allowed in touch rugby.

Diving To Score In Touch Rugby

Diving to score a try is one of the most iconic actions in rugby. This picture shows good technique: diving downward, ball in both hands, and eyes focused on where you want the ball to land.

Some coaches or tournaments do not allow diving to score in touch rugby. This happens particularly at the lower age groups.

If you’ve signed up for a new touch rugby team, keep an eye on what your teammates do. Some teams consider diving to be the worst form of showboating. And if you’re not sure before you take to the field for your big debut, just don’t be this guy:

Third and most importantly, there wasn’t an opposition player near him. That’s the definition of showboating.

By the way – diving can hurt!

Younger players may not need to be discouraged from diving. When they’ve tried it once, they’re going to find that grass burns hurt!

When you score a try in touch rugby, the ball is turned over to the opposition. They resume play from the halfway line.

If the attacking team does not score after six touches, then the ball is turned over to the opposition.