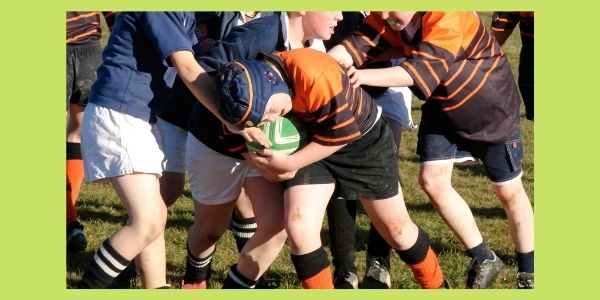 When you watch a game of rugby, you’ll notice that most players aren’t wearing helmets or any kind of headgear. However, there are usually one or two players on each side with what’s called a scrum cap. A scrum cap is a soft thin cap that comes down over the ears.

The sport is often compared to American football, and people wonder why helmets aren’t used in rugby. This article explains the reasons.

Helmets Are Not Allowed In The Rules Of Rugby

The governing board of World Rugby has strict rules about what players can wear on the pitch. Hardened material is not allowed, which of course rules out football helmets. And the maximum thickness of the padding is about one centimeter.

Rugby referees conduct a safety inspection before players take to the field. The aim is to check that boots (cleats) and protective gear are safe and conform to the proper standards. There’s a special emphasis on ensuring that a player’s gear won’t injure an opponent.

When referees spot a problem, they won’t allow the player onto the pitch. If a player arrived with a helmet, the referee would simply tell them to remove it. There can be no arguments, as the referee’s decision is final.

What Happens If A Rugby Player Tries To Play With A Helmet?

Usually, footwear is the problem at junior level when an inexperienced player rocks up with soccer cleats.

But I’ve heard of an underage match where one of the locks had a scrum cap with hardened leather. That would be considered a helmet.  So, what happened?

The referee spotted the problem during the safety inspection and spoke to the player, the coach, and the captain. He made it clear that the hard cap couldn’t be worn during the match.

That should have been that, but the youngster didn’t pay any attention. Shortly after the match kicked off, the referee spotted the helmet was still being worn and blew his whistle. He promptly issued a red card and sent the player off.

A red card may seem harsh, but the referee followed the rulebook correctly. Refusing to accept a referee’s decision is a serious infraction. And in this case, the player got an additional ban from a disciplinary panel. Talk about learning a lesson the hard way!

Even though concussion is a concern in rugby, there is no call within rugby for players to wear helmets. That may surprise you when there seem to be many similarities with American football. After all, both are collision sports and head injuries sometimes happen.

If a player misjudges a tackle and hits the opponent’s head, the referee will award at least a penalty. If there’s any kind of force, the referee will send the player off. This could be a straight red card if the referee doesn’t see any “mitigating factor” such as the tackled player ducking or slipping into the tackle

Unfortunately, accidents and injuries happen. I’ve seen tackling players knock themselves out by hitting their forehead against the knee of the opponent. It’s rare because players are taught proper tackling technique from the first time they take up the game.

Rugby players are trained to protect their heads when making tackles. We teach youngsters to keep low and position their head to the side of the opponent’s hip. “Cheek to cheek” is the phrase (yes, that’s your cheek to the opponent’s butt cheek).

Injuries from the ball are rare

Players occasionally get hit in the head with the ball. We are taught to protect our head with our arms when attempting to charge down an opponent’s kick. But get that wrong, and a broken nose is a likely outcome.

Cricketers wear helmets to protect their heads from the ball. Shouldn’t rugby players?

No, because a rugby ball is very different. You can read our article on the rubber bladders inside a rugby ball. And the encasing is either plastic or leather.

A small hard ball, as used in cricket, could do serious damage. The larger and bouncier rugby ball can hurt, but it won’t crack a skull.

We’ve covered why rugby players don’t wear helmets. So, why do you see a few players with headgear in each match?

Rugby scrum caps are worn primarily to protect ears and heads from abrasions in the scrum.

This pic is a scrum from behind! Where are the players’ heads? You may be sorry you asked!

The number eight (the guy furthest to the back) is wedged between the outer hips of the locks in front of him. Flankers and locks drive one side of their head against one of their own players. And the front row must position their heads safely against their opponents.

The scrum cap protects against the constant rubbing on the side of the head. “Cauliflower ear” is the typical outcome of years of scrummaging without a cap. One or both ears get misshapen and swollen.

It’s important to understand that scrum caps don’t give protection against concussions and other head injuries. You’ll see some backs wearing scrum caps, and that is often because they’ve had concussions in the past. The scrum cap is probably more of a psychological benefit for many.

But there’s another reason why some players wear a scrum cap, and that becomes clear when they remove it. Does the player reveal a shiny bald head? A bald or shaven head can pick up a lot of little scrapes in rucks, whether you’re a back or a forward.