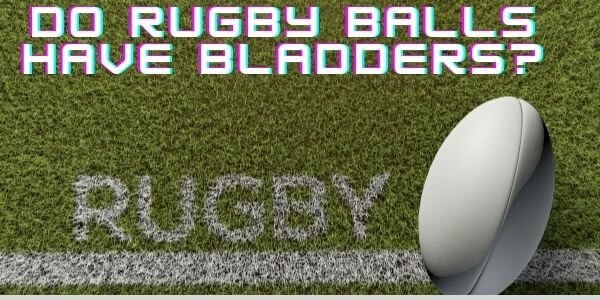 If you opened a rugby ball, what would you see inside?

Modern rugby balls contain rubber or synthetic bladders with an attached valve for inflation. Historically, rugby balls had pigs’ bladders that were inflated by mouth.

The bladders inside rugby balls are commonly made with one of three types of materials:

The material determines a number of important factors:

The next sections describe the three types of bladder in more detail. Here is a summary that compares the qualities for each type of material:

Natural latex bladders are very widely used. They are the cheapest to manufacture and are also quite resilient to wear and tear. This is important for clubs that need a lot of training balls. It’s also an advantage for households with dogs!

The bladders are light and soft and provide a good bounce. This combines for a good “feel” for players.

The major disadvantage is that latex is permeable i.e. air passes through the material. A rugby ball with a latex bladder will deflate faster than the other types. As it needs to be inflated more often, this becomes onerous for clubs with many training balls.

The latex bladder will even deflate slowly throughout a rugby match. Elite competitions tend not to use match balls with latex bladders.

Although we call them butyl bladders, the butyl is mixed with rubber. The ratio ranges from 30% to 80%. The higher end is the most costly and highest quality butyl bladder.

The key advantage over latex is air retention. They keep their shape better over time and are more durable. They are a popular choice for club training balls.

The butyl bladders are a little heavier and less soft than latex. But they still provide a good playing experience and are used for both training and match balls.

You may also notice that some manufacturers are adding butyl valves to latex bladders. The idea is that this will give a boost to air retention. But if you’re making your purchase based on seeing mention of butyl, make sure that it’s not just the valve!

As manufacturers compete to be the ball of choice for elite competition, there is continued innovation in bladders. After all, rugby balls originally contained noxious pigs’ bladders! (See our section on historic development).

Manufacturers aim to produce a bladder with the resilience and feel of latex while having high air retention.

Gilbert’s proprietary copolymer bladders shouldn’t need inflation for over a month. And it should certainly retain its feel and shape through a single match.

The higher cost of production means that rugby balls with these bladders are the most expensive.

The original rugby balls were produced for schoolboys in England in the 1820s. They contained pigs’ bladders that were inflated by blowing by mouth through a pipe. The pig’s bladder had to be reasonably fresh. And so, was predictably stinky.

The stem of a clay pipe was broken and used as the “pump”. The narrow end was inserted into the opening of the bladder.

An unfortunate individual had to blow through the other end of the stem with enough gusto to inflate the bladder significantly. When it was fully inflated, the bladder would be tied to trap the air.

Panels of stiff leather were stitched “around” the bladder to encase it fully.

We actually know the identities of some of the individuals who blew up these bladders.

William Gilbert was a cobbler (a shoemaker) who started making balls for the local school in the town of Rugby, England. His nephew James was famed in the town for his ability to puff through the pipe to inflate the bladder.

Does the name Gilbert ring a bell? Yep, the family is the reason for this famous rugby brand:

William Gilbert had an apprentice called Richard Lindon who took off to start a cobbler and ball shop of his own. Literally on the same street – that’s competition for you!

Richard and his wife had seventeen children. If that wasn’t enough work for the good lady, she also took on the task of inflating the pigs’ bladders.

I mentioned that the bladders would be fresh and stinky. Some might also have been diseased. Those clay pipe stems would not provide much protection. The unfortunate Mrs. Lindon died from a lung disease.

Richard Lindon himself apparently believed that the pigs were responsible. He sought an alternative solution at a time when a new invention had come on the Victorian scene. Lindon seized upon India Rubber as the new material.

One big hurdle was that India Rubber was much more difficult to inflate through the efforts of human lungs. Lindon was undoubtedly an inventive chap, and he’d seen an ear syringe in action.

He came up with the idea of a brass pump. This was still human labor, but limbs instead of lungs!

So Linden started the move of manufacturing toward rubber. Are you wondering how come you’ve never heard of Lindon, while Gilbert is plastered over every rugby ball you see?

Richard Lindon never patented any of his inventions. Several other companies (including Gilbert) took Lindon’s ball and ran away with it – so to speak.

Replacing The Bladder In A Leather Rugby Ball

This gets asked by people who find an old leather rugby ball when they’re cleaning out the garage. If it won’t hold air, the bladder may be perished. So how to replace the bladder?

This is much easier than with the modern plastic balls. Your leather rugby ball has laces which you can undo to take out the old bladder and put in the new one.

Of course, this begs the question as to how to source a replacement bladder. You can get a replacement for a size 5 leather ball from the Gilbert company.

Replacing The Bladder In A Plastic Rugby Ball

After all, there are no laces to undo. You’d have to unstitch the casing and stitch it back up when you’ve switched out the bladder.

If you’re determined, it can be done. You may have problems sourcing a bladder as a dedicated purchase. The way around this is to buy a cheap ball of the same size and remove the bladder. They tend to be lightly stuck with glue.

One of the most amusing scenes in rugby is watching a hapless player deal badly with a bouncing ball. All coaches will tell you: to never let a rugby ball bounce.

Because rugby balls do bounce, but not predictably. They often shoot off in a lateral direction, straight into the path of a gleeful opposition player.

It’s the bladder that helps a rugby ball to bounce. How much bounce depends on the elasticity of the bladder material. As I mentioned in the opening section, the latex rugby balls deliver more bounce than their synthetic alternatives.